Last week I attended New Adventures, a digital design conference over in Nottingham, and it’s safe to say it was excellent, and has definitely left an impression.

After a long, early morning drive in the ice and wind, I finally arrived in Nottingham for the first time. Keiko has definitely seen better days! 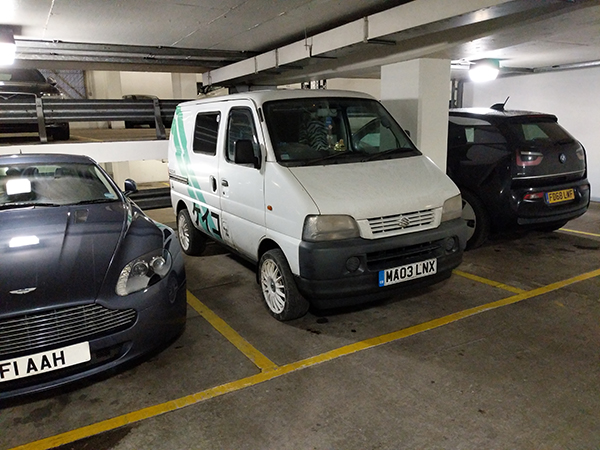 Jeremy opened the conference with a well rounded and inspirational talk, that revolved around the concept of “Pace layers”. I’ve already found myself thinking about the layers concept since the talk, and applying it to everyday situations, which is exactly what Jeremy said would happen!

Two reading suggestions were also made in his talk, Understanding Comics and A Dao of web design, both of which caught my attention and I plan to read myself.

Clare talked about her journey creating Code Club. I think my key take-away from her talk was when she said:

“If you knew all the things beforehand, you’d never start”

Something along those lines… but in essence, don’t let your perceived lack of knowledge hold you back from starting something. This really hit home for me, and i’ll certainly be making an effort to remember this next time i’m faced with doubt when starting something new.

Josh’s talk left me with this key quote:

“Design should have a seat at the table.”

This is with regards to any decisions made, design should always be a key factor, and should always have a seat at the decision-making table.

Another great bit of advice from Josh was to share design ideas and progress often, and don’t let fear prevent that. I think this is really important, since it’s easy to dismiss ideas and come up with new ones in your own bubble, but as highlighted in Brendan’s talk later in the day, sometimes the things you throw away have value too.

Jessica relayed some great advice she learned from a co-worker:

This fits perfectly with Josh’s advice in the previous talk, and totally makes sense. Sometimes it’s hard for people to get fully onboard with an idea, so providing the reasoning at the same time as presenting can really help that process.

Are you working on too many things?

Ashley mentioned this with regards to juggling too many projects at once, and as a result, none of them getting her full attention. She talked about how she focused on her company “With Jack”, and how doing that eventually led to it’s success.

Some other key advice I think was particularly useful:

Brendan’s talk was really fun, most of my notes here just ended up being stuff I want to try out myself.

A couple of quotes I want to remember:

Nobody knows or cares how it’s made. Make it your way.

Don’t get hung up on the “how”, just focus on the ideas and make it happen any way you can.

Do things you don’t know how to do.

Sometimes we forget to experiment, so in a similar vein to what Clare said earlier in the day, just dive in. 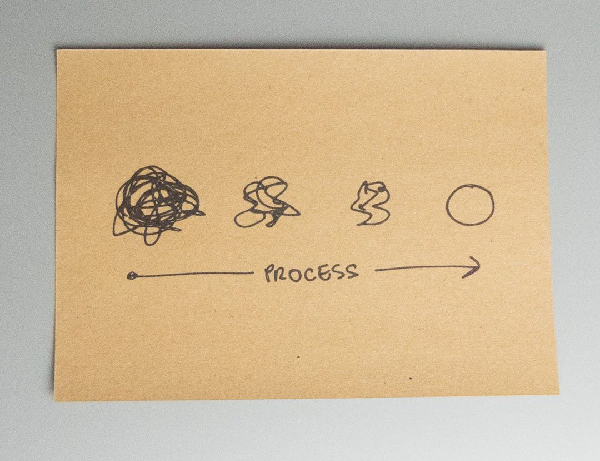 My favourite slide of the day, Brendan’s “process”! This is exactly how I imagine most creatives arrive at their conclusions :)

Helen made some great points around being realistic about the audience you’re designing for.

Naz talked about the advantages of a diverse team, and how that directly links to a better end product.

He referred to data that suggested more variety in a team produces more innovation. Again, this further pushed the point that sharing, and being more transparent in the design process is always good.

Eathan closed New Adventures 2019 with a stirring talk, that will certainly have left it’s mark on everyone present. He talked about how design is capable of cementing inequalities, if in the wrong hands, with some shocking examples of this in architecture. This helped to demonstrate the power design has, and this proof became clearer as the talk went on.

I felt like Eathan was showing us how much the web has grown over the last few years, and how easily it could change for the worse. He referred to Ursula Franklin’s writing about how technology grows from something on the fringe, to something deeply ingrained in society, and how this is currently happening with the internet. As a result, the web has gained a lot more weight in all aspects of life, making it all the more important to not lose track of the bigger picture.

The glimmer of hope came at the end of the talk when Eathan concluded by telling us all that it’s now our responsibility to help guide it on the right path again, which was exactly what we all needed to hear, especially so, as a bookend to all of the topics covered by the other speakers throughout the day.

New Adventures has inspired me to be a better designer for sure, and it’s also given me a new perspective on the meaningfulness behind the work i’m doing. I’m sure I wasn’t the only one who thought this, let’s start this new adventure and make the web a better place. :)

Finally I’d also like to give a special thanks to Paul Jardine for inviting me along and Make Do for covering my ticket!