You might think at first glance that Hellblade is just a horror game set around Norse mythology. While this is true, it’s also hiding another unusual key aspect, in that it deals with the main character’s struggle with the mental health disorder “psychosis”. This sets the scene for a really unique experience, as you not only find yourself travelling through the depths of Viking hell, but also the depths of another kind, in the form of a personal and distressing struggle with hallucinations and delusions.

Prior to playing, I’d read about how Hellblade’s developers, British game studio Ninja Theory, worked closely with both mental health specialists and real psychosis sufferers. According to their testimony, the game does successfully present an accurate portrayal of the disorder, which further adds to the game’s unique and frightening journey.

The story follows Senua, a Celtic warrior, who sets out on a quest to save her dead lover’s soul from Helheim, the Norse mythological underworld. The game itself features horror themes, hack and slash combat and puzzle aspects, with fairly frequent cinematic cutscenes. Overall the game is driven more by the story than by gameplay, with everything playing out in a fairly linear fashion. 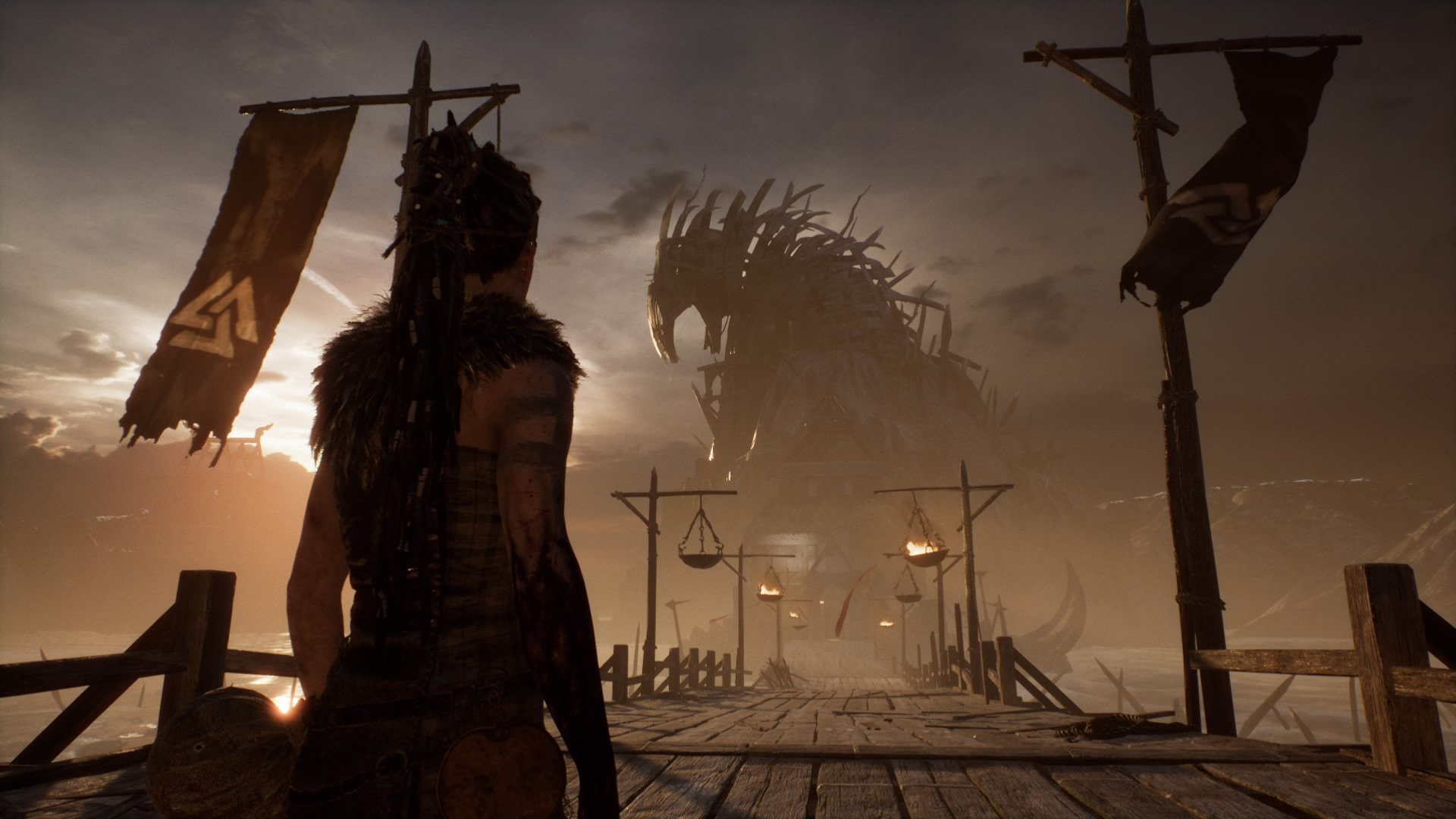 The way the story unfolds is one of the core draws of the game. Cutscenes mainly revolve around Senua, but also feature some live action acting from side characters. During gameplay you are also constantly accompanied by various voices inside Senua’s mind, some of which offer you advice, but mostly they act as a strange running commentary, often criticising your decisions.

Spread throughout the game you encounter “lore stones” that trigger voice narrated tales from Norse mythology. If you’re anything like me, you’ll certainly appreciate these and after a while, I found myself hunting them down just to find out what happens next. With each area containing its own separate story, you find these side tales are interesting enough to give you a little extra reason to move forward with progression through the game.

Near the start of the game, you’re advised that “rot” growing up Senua’s arm will eventually spread closer to her head, and if it does, she’ll die and all saved progress will be lost. Although this didn’t happen in my play-through, it does add an interesting angle to the game that makes you a little more worried about dying needlessly. As I progressed, some of the more challenging fights had me failing a few times in a row, so I could see the blackness growing closer towards Senua’s head, as you can imagine, the thought that the next death could mean starting the game from the very beginning did take its toll. I thought this mechanic was cleverly thought out, successfully putting you just a little closer to the protagonist’s mindset. 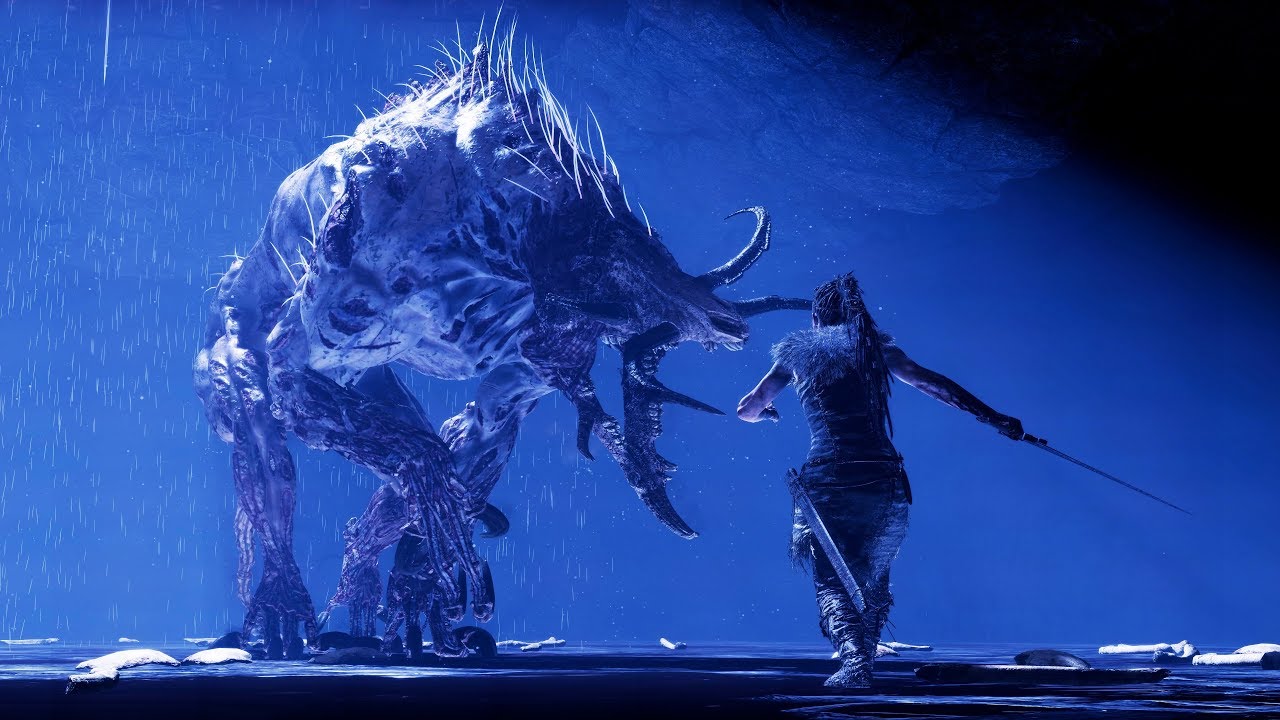 The facial graphics and character design of Senua are exceptional. I think this stands out as some of the most realistic human expression portrayals I’ve seen in a game to date. That being said, the rest of the game’s graphics are fairly average by today’s standards, although we might be spoiled in that respect, as the standard for environmental graphics is really high nowadays. There’s lots of cinematic moments and a good variety of landscapes and settings which keep progression interesting visually too.

Although Senua’s character graphics are impressive, you can tell Ninja Theory didn’t really have time to give this level of detail for other characters, so as a halfway house they’ve blended real acting in. I feel like this looks a little off, but for a small scale development it’s certainly a clever way to achieve what they wanted. Being a team of only around twenty developers, I won’t hold this against them!

The voice acting and sound design is excellent, especially when you follow the game’s advice pre start menu, and use a headset to fully appreciate the “3D Binaural Sound” composition. The voices inside Senua’s head are so convincing that you sometimes feel like they are really speaking right next to you. The music and atmospheric sounds blend together, with quite a lot of the terrifying visions being made that much more frightening due to the audio alone.

I found gameplay is about average, with an even split between combat, puzzle solving and travelling. The combat was initially fun, but after a few battles I felt I’d seen all it had to offer, with the difficulty only increasing with the amount of opponents and their health. When compared with other hack and slash games, you’ll find that the complexity does level out early on, with the combat remaining basic even towards the end of the game. That being said, generally the combat is satisfying, I just felt it could have benefited from some sort of levelling system, alternative weapons or classes to change things up a bit.

The puzzle sections are just right - challenging but not too difficult. Some of them reminded me of another game “The Witness” in which you have to find shapes in the game environment and line them up correctly. The puzzles don’t always remain the same, so you’ll always have to think at least a little before figuring out what you need to do.

Lastly, It’s worth noting that the game is very short, only taking around 7 hours from start to finish. If you factor in a good amount of that time is spent in cinematic cutscenes, the game hasn’t a huge amount of playtime, when compared with others of its type. As with a lot of linear, story driven games, there’s not really any replay value either. With that in mind, I’d suggest getting all lore stones on the first play through if you’re a trophy hunter, since doing this doesn’t particularly detract from the experience either. (See walkthrough).

Hellblade: Senua’s Sacrifice is a dark atmospheric tale, featuring an unlikely mix of Norse mythology and a realistic dive into the mind of someone suffering from psychosis. Its strengths lie in the impressive facial graphics and motion capture performance by Melina Juergens, expert sound design and storytelling. It falls short when it comes to some gameplay aspects, but not enough to bring it down as a whole. With it being such a short undertaking, I’d definitely recommend it for the fact it does something different, rarely seen in games.